Don’t You Dare Call Them a Mob 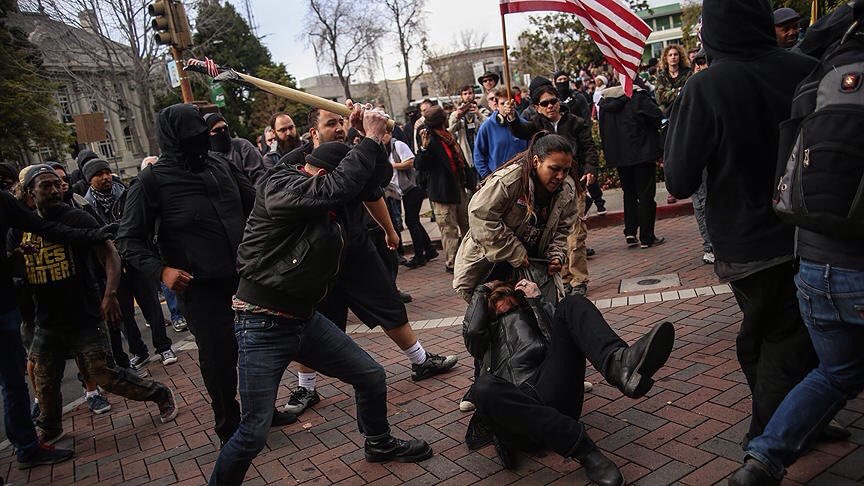 CONTINUING UPDATES FROM THE CULTURE WARS:

Well, it’s Democratic operative with a byline John Harwood after he was issued his talking points from 2018’s equivalent to the Journolist, so what did you expect? But how would NBC rate “mob” as a dog whistle up against “golf” and “Chicago,” which were spotted by NBC’s Bletchley Park-level racial decoder equipment in 2012?

AND WHILE WE’RE AT IT: Why are the leaders of the Left and the Democrats (but I repeat myself) silent when their sycophants commit mob violence in the name of causes they support? This is emblematic of the Left and Democrats. By contrast there is this: Conservatives jump to condemn the mob attacks on Nancy Pelosi.

FLASHBACK: Can anyone recall the shock and dismay expressed by the MSM when the Left uniformly called the Tea Party a mob. A mob that picked up their trash after their gatherings. Oh, and the next time someone claims that these mobs aren’t mobs, I’m going to ask them to define mob. Here’s the Merriam-Webster definition:

1: a large and disorderly crowd of people: especially one bent on riotous or destructive action

A Mob. You decide. After the New York Republican Party [headquarters], was vandalized, including broken windows and spray-painted anarchist symbols. The criminal group that did the damage also left a note:

Our attack is merely a beginning. We are not passive, we are not civil, and we will not apologize. Those of good conscience and clear mind know this state of oppression cannot remain. The US fascist political system is one of the most savage institutions in history and we will combat it relentlessly until all are free of American barbarism

If you’re still uncertain, here’s help. How To Tell If You Are Part Of A Mob?

But, there’s more. Here is a profoundly prescient warning, Ann Coulter’s  DEMONIC: How the liberal mob is endangering America

“The Democratic Party activates mobs, depends on mobs, coddles mobs, publicizes and celebrates mobs—it is the mob. Sweeping in its scope and relentless in its argument, Demonic explains the peculiarities of liberals as standard groupthink behavior. To understand mobs is to understand liberals.“

Episode 493,209: Don’t you dare call them a mob – : Objective reporters help us understand what a mob isn’t

Actually, This will be impossible for progressives because they are more interested in virtue signalling than about, you know, actually persuading people.“Instead of interrupting hearings or yelling in elevators, progressives should focus on the boring, difficult work of civilly appealing to voters in all 50 states.”

Blaming the Right for Leftist violence goes back to the 60s and before: The politics of reporting on left-wing violence against the right.

Leftist Vocabulary: It’s Only an ‘Angry Mob’ if It’s Made Up of Republicans. 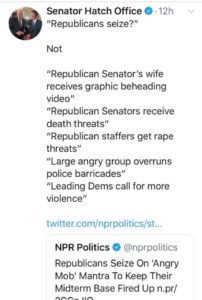 To Democrats: When you sew evil, so shall you reap

Hillary: ‘You cannot be civil with a political party that wants to destroy what you stand for.’ Or, put another way, It’s only “hate” when Republicans do it. When Democrats do it, it’s “passion for justice.”

● Michelle Obama once said, “When they [Republicans] go low, we [Democrats] go high.” Former Attorney General Eric Holder disagreed yesterday. He said,   “…When they go low, we kick them.”

● Rep. Ruben Gallego (D-AZ): We Are Less Than 60 Days From Totally ‘Kicking the S–t Out of the Republicans.’

● Politico: After failing to stop Kavanaugh’s confirmation, Democrats wonder if it’s time to be more ruthless.

Many (most?) of these are taken from postings from @instapundit, especially from Ed Driscoll.