Gun Free Zones: First the Truth, Then Your Opinion

In this post, I examine at the claims advanced in the gun-violence debate by both sides.

But first, let’s get some key assumptions out of the way: Debates are productive if, and only if, all sides advance opinions based on fact. Or, as a great man once said, “First the truth, then opinion”[1]Dennis Prager.

So, here is THE critical truth that is predicate to the exercise of determing the best way(s) of detering gun-mediated mass violence. This truth is manifest, objective, and inarguable:

If we cannot agree on this assumption as fact, then there is no point in continuing. Stop now. But, if you choose to proceed, then David Harsanyi’s essay published in the Federalist shortly after the Parkland shooting is informative. He catalogues the false narratives used by those whose outrage is directed away from the root cause of mass shootings.

Above and beyond the observation that misdirected moral agency is the root cause of these tragedies, I now turn to a set of empirical truths: 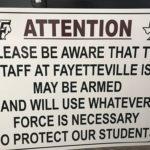 Gun Free Zones in schools is not without merit provided some means are established that will protect students from those for whom Gun Free Zones are an invitation to violence. The analogy that springs to mind is this: airplanes engaged in commercial air passenger transport are gun-free zones. BUT, such gun-free zones are enforced by pre-screening passengers.

Gun free school zones are useless in the absence of enforcement of some kind (the recent Parkland massacre is a case in point). To this end, the Fayettesville ISD comes to mind. Recently, the Fayettesville Independent School District (ISD) has chosen to arm selected faculty and staff who elect to undergo a psychological exam, pass regular drug tests, complete a combat firearms training course and an annual firearms qualification test. Moreover, the school district will still maintain its gun-free zone policy – except for its armed guards. Bravo.

More generally, it might surprise many you who abhor guns that schools have been arming faculty and staff for sometime. So, let’s take a breath and look at the facts:

The four examples presented above are by no means exhaustive but are illustrative of what happens when cooler heads prevail. More specifically, these examples are part of a largely unreported trend (esp., by major media outlets) in Education – both for K-12 and university level institutions. Such institutions, especially rural ones in which law enforcement cannot quickly respond.

As mentioned previously, the beauty of arming selected faculty and staff is that a school district or university can still maintain its gun free zone.

Here’s What researchers who study this stuff have to say?

Schools are safer than they were in the 90s, and school shootings are not more common than they used to be, researchers say

This entry was posted in Gun Control, Law Enforcement, News. Bookmark the permalink.