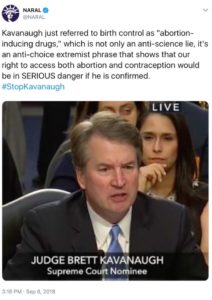 I have a PhD in a closely related field[1]Immunology – a field of study that, among other observations, sometimes models mammalian fetuses as akin to tumors or organ grafts whose maternal host is rendered tolerant – much in the … Continue reading so I feel completely qualified to assess the scientific merits of Judge Kavanaugh’s testimony in the meme on the right.

The issue at question in Kavanaugh’s testimony are the kinds of birth control drugs known as abortifacients because[2]Their are two main kinds of birth control drugs. Those that prevent pregnancy (contraceptives) and those that abort an a placentally attached fetus (abortifacients). they cause the mother to expel her baby prior to birth. For example, among the ways[3]Plan B works in either of two ways – it prevents implantation, but if implantation occurs it will cause the zygote to detach from the placenta and be expelled. in which the Plan B abortifacient (the “morning after pill”), works is to prevent the implantation and subsequent expulsion of a zygote, i.e., a fertilized egg or, in other words, a human embryo). This is a very effective method of preventing the birth of a human child already within its mother’s Uterus.

Just for completeness, there are two other, more common pharmaceutical abortifacients, Mifepristone and Misoprostol These are birth control drugs that are used to induce miscarriages in women as late as the 2nd and 3rd trimesters. Causing miscarriages has proven to be a 100% effective way of preventing the birth of a human child.

But just to point out how utterly ignorant is this meme and those who choose to propagate it, note for a drug to be categorized as a “birth control” drug, its primary effect must be to prevent birth. Birth control methods (drugs, devices, and procedures) include, but are not limited to. preventing ovulation, insemination, implantation, or corrupting the uterine wall. IUDs, abstinence, and abortions (including dismembering the human child in utero) are all classified as birth control.

Judge Kavanaugh was right and NARAL and their supporters are just ignorant of the basic concept that while all abortifacients are indeed classified as “birth control”, not all birth control pills are abortifacients.

Finally, I suspect that Lefties interpret Judge Kavanaugh’s testimony as extremist because they live in a world where euphemism and reason are indistinguishable. It’s not abortion. It’s a woman’s “right to choose.”

This entry was posted in Abortion, Current Events, Ethics and Morality. Bookmark the permalink.