Links For The Compleat Climate Denier 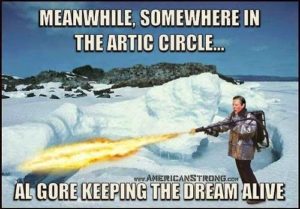 Most (All?) so-called climate deniers  with whom I have conversations, hav known or with whom I have studied base their denials on an understanding of the empirical evidence used to justify anthropogenic Climate Change (aCC). You should pay special attention to the previous sentence because most who believe in catastrophic climate change due to human activity do not base their claims on empirical evidence and this is true of many (most?) scientists who support the catastrophic view. They all seem to have the following in common: (1) they take a political postion, almost always Leftist (e.g., only government can save us), (2) argumentum ad verecundiam((appeal to authority)), or (3) both. This is why the scaffold of evidence upon which advocates for aCC base their arguments, fall apart when examined critically.

So, if you, like me, are a proud climate denier, then these are the links for you.

HINT: if you value your Lefty friends and don’t want to antagonize (or lose) them, then DO NOT send this post or any link(s) from this set of links in this post. Most will not read them because reasons.

Without further ado, then, here are the links the climate advocates have not read AND will not read because ignorance permits them to live in fantasy land where catastrophe is just over the horizon.

Here is a very good article about Climate Change by climate scientist John Christy that wonderfully summarizes the state of the art in climate change research (and that also describes the unwillingness of the climate change modelling community to correct their models in the face of empirical observations to the contrary).

Since reason and science do not work, use satire.

The Truth About Climate Change

The Complex Physics of Global Warming

How Much of Atmospheric CO2 Increase is Natural?

So, what if there is no such thing (scientifically speaking) of a “Global Climate”?

The Great Lakes reveal the fatal flaw in Global Warming

Climate Alarmists: The Summer of Their Discontent

How To Discuss Climate Change with a “Climate Alarmist”

The Politics of Climate Change Alarmism

You’ll Need a Bigger Blog: How much is Climate Alarmism Based on Scientific Fraud?

No. Next Question: Is Global Warming Killing Off the Polar Bears?

Unexpectedly: Global Warming Is a Hoax

Are We All Gonna Die? The Climate Hoax

Nah, scientists don’t do these things: NOAA didn’t like the data so they erased it and also here and here.

Say it isn’t so: How climate alarmism is politically useful, even when the science is fraudulent

This entry was posted in Climate Change, Politics, Science. Bookmark the permalink.