Most Excellent: The Helsinki Meeting 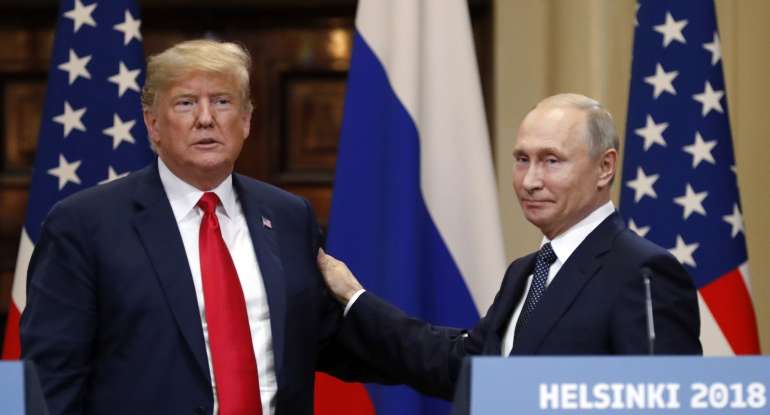 I started out as a #NeverTrumper and looking back in hindsight I now see that my reasons are still valid. But they are no longer compelling. The difference now is that those reasons did not bear out my fears, vis, that Trump’s personality was such as to preclude his success as President. And he would fail to enact the conservative policies he was promising. Today, Donald Trump is as abrasive, overbearing, and crude as he was in 2016 when I didn’t vote for him. What is different is that he has proved that [his] conservative policies have enabled the flourishing of America in spite of his personality “deficits”.

Which brings me to Helsinki.

President Trump made a mess of the Helsinki presser but the meeting was successful in that Russia and America now have a basis for moving forward. The mess and concommittent outrage had nothing to do with the content of the meeting, but rather was the reaction to the truths he thought needed expressing. The reaction from both the Left and Right was over-the-top because he had criticized the American intelligence community. Had thrown them under the bus, as it were.

Well, why not.  He simply called out the political managers of the intelligence community for their malfeasance and political machinations that have been on public display ever since the Harry Reid conspired with James Comey to concoct a Russian collusion investigation.

So Let’s inject some context into this Helsinki mess. First some background: 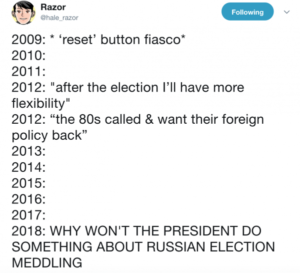 Stephen Cohen, Prof. Emeritus of Russian Studies at NYU: “A President who is critical of intelligence is a good President.”

American foreign policy is … bassackwards. Should be based on interests, not values or friendships. Countries don’t have friends, rather they have interests. Basing our foreign policy on England as a ‘friend’ or Iran as an ‘enemy’ is stupid and dangerous. Trump instinctively knows this.

The unimportance of personality: an essay on why personality is irrelevant to the conduct of policy (foreign and domestic).

Now, read some views that are contrarian to the howling Lefty horde.

Trump’s Helsinki comments were a defense of American voters