Bill Barr: The Adult In The Room

Quoted in full from Glenn Reynolds of Instapundit fame.

GLENN “WROTE THIS FOR USA TODAY right after the Barr press conference, but they don’t want to run it because it doesn’t incorporate the Mueller Report. Since I don’t have time to read and digest the report this afternoon (I’m teaching two 2-hour classes back to back), I’m just posting it here. Enjoy!”

BILL BARR: ADULT IN THE ROOM

Bill Barr’s press conference regarding the Mueller Report release was notable for both style and substance.

On style, he reminded us that in an age of shrieking media hysteria and out-of-control twitter-pols, there is still a place for stolid, stodgy, rule-following bureaucrats. Standing at the lectern with his lieutenants behind him, he calmly and carefully explained what was in the report, what had been redacted and why, and what the applicable laws and rules were. He didn’t play to the media, or to the social media. In tone and manner he was, well, boring.

On substance, he made clear that, after two years of investigation, thousands of subpoenas, and endless media speculation, the “Russian collusion” story was, as some of us had noted all along, a story about nothing. No member of Trump’s campaign — and in fact, no American anywhere — colluded with the Russians to influence the campaign.

In Barr’s words: “As the Special Counsel’s report makes clear, the Russian government sought to interfere in our election. But thanks to the Special Counsel’s thorough investigation, we now know that the Russian operatives who perpetrated these schemes did not have the cooperation of President Trump or the Trump campaign – or the knowing assistance of any other Americans for that matter. That is something that all Americans can and should be grateful to have confirmed. “

Nor do fallback claims of “obstruction” hold water: “In assessing the President’s actions discussed in the report, it is important to bear in mind the context. President Trump faced an unprecedented situation. As he entered into office, and sought to perform his responsibilities as President, federal agents and prosecutors were scrutinizing his conduct before and after taking office, and the conduct of some of his associates. At the same time, there was relentless speculation in the news media about the President’s personal culpability. Yet, as he said from the beginning, there was in fact no collusion. And as the Special Counsel’s report acknowledges, there is substantial evidence to show that the President was frustrated and angered by a sincere belief that the investigation was undermining his presidency, propelled by his political opponents, and fueled by illegal leaks. Nonetheless, the White House fully cooperated with the Special Counsel’s investigation, providing unfettered access to campaign and White House documents, directing senior aides to testify freely, and asserting no privilege claims. And at the same time, the President took no act that in fact deprived the Special Counsel of the documents and witnesses necessary to complete his investigation. Apart from whether the acts were obstructive, this evidence of non-corrupt motives weighs heavily against any allegation that the President had a corrupt intent to obstruct the investigation.”

Barr also noted that the White House did not ask for any redactions in the report, and President Trump chose not to exert Executive Privilege, even though, in Barr’s words, “he would have been well within his rights to do so.” What redactions were made in the report were made by the Department of Justice attorneys and Special Counsel Robert Mueller’s staff, and were designed to protect ongoing investigations and prosecutions, and some national security matters.

So no collusion, and no obstruction, and no serious grounds for complaining about the redactions. No doubt some politicians, eager to keep their base heated up, will try to pretend otherwise, and some cable news channels and media outlets, desperate for viewers and clicks, will go along.

But normal people should be pleased and relieved that there was no collusion, even as they should be angry that a huge chunk of our political class seriously maintained that the President of the United States was a Russian puppet. That claim, based more on a desire to undo the 2016 election than on any actual evidence, was a poisonous corruption of our political discourse, and those involved should be — but won’t be — ashamed.

They should, however, be ignored in the future.

In Bernie’s defense, scrimping on donations to the needy increases his tax liability. This is a feature, not a bug. In other words, Bernie “donates” by paying more taxes to be distributed to lobbyists. Mean-spirited conservatives avoid paying taxes by funneling money to those who really need it. 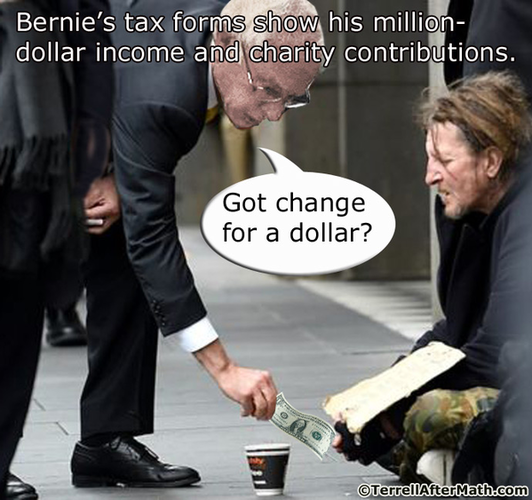 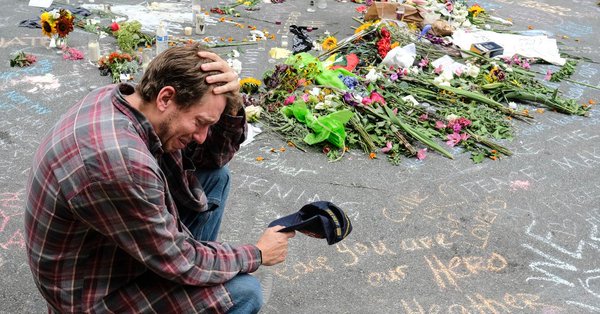 Omar Defenders: “How dare you question her patriotism”

Glen Reynolds: “To be fair, I don’t think there’s much question about her patriotism.

Teachers to Focus on Racial Resentment Not Education

Max Eden writing at the City Journal has an article about The American Educational Research Association’s (AERA) annual conference beginning this weekend in Toronto.

The mission of AERA and presumably the 14,000 academic researchers attending the conference is”to advance knowledge about education, to encourage scholarly inquiry related to education, and to promote the use of research to improve education and serve the public good.”

Presumably the research conducted by these folks will help our children be better educated. So, what are these folks researching? The conference poster board gives us a clue. Here it is:

What in the world does “…multimodal narratives to democratize evidence” mean? I know what each word means but don’t have a clue as to how this relates to education. Looking further through their agende we come across these gems:

The conference, to be blunt, has devolved into a gathering of credentialed but stupid academics who have subsumed their mission to educate in favor of the latest Lefty racism trope – whiteness and privilige.

The comments are instructive. Here’s my favorite:

“Whites” and “whiteness” are not the problem. The SATs and other test scores tell the story. Since the mid-1960s, whites have been dutifully helping to make schools more equal by getting dumber every year. The real problem is Asians. Let’s hope the next education conference deals with “Asianity,” and its disturbing quest for excellence.