In 1973 the U.S. was still engaged in the Vietnam war. We hadn’t yet tucked in our tails and abandoned the South Vietnamese to the predations of the Russian-backed North Vietnamese. Back here in the U.S., veterans were largely reviled in the elite conclaves of major coastal cities and universities everywhere. Patriotism, as historically understood, was under incessant attack ultimately to be redefined as best expressed by protest against and vilification of American values.

I am reminded of this by today’s false worship of the military by Democrat politicians who speak of the military using descriptors like honor and courage. This is different than 1973 when the Democrats were honest about their antithetical view of the essential nature of the practice of patriotism((Dissent is the highest form of patriotism – John Lindsy, circa 1979)) 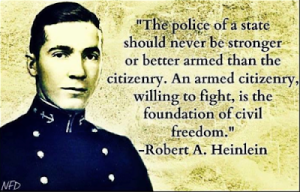 But nothing has really changed and I’m reminded of Robert Heinlein’s speech ((h/t Instapundit)) to the U.S. Naval Academy during the height of the Vietnam war protests and the vilification of the American fighter.

As one drives through the bushveldt of East Africa it is easy to spot herds of baboons grazing on the ground. But not by looking at the ground. Instead you look up and spot the lookout, an adult male posted on a limb of a tree where he has a clear view all around him – which is why you can spot him; he has to be where he can see a leopard in time to give the alarm. On the ground a leopard can catch a baboon… but if a baboon is warned in time to reach the trees, he can out-climb a leopard. The lookout is a young male assigned to that duty and there he will stay, until the bull of the herd sends up another male to relieve him. Keep your eye on that baboon; we’ll be back to him.

Today, in the United States, it is popular among self-styled ‘intellectuals’ to sneer at patriotism. They seem to think that it is axiomatic that any civilized man is a pacifist, and they treat the military profession with contempt. ‘Warmongers’ – ‘Imperialists’ – ‘Hired killers in uniform’ – you have all heard such sneers and you will hear them again. One of their favorite quotations is: ‘Patriotism is the last refuge of a scoundrel.’ What they never mention is that the man who made that sneering remark was a fat, gluttonous slob((Samuel Johnson)) who was pursued all his life by a pathological fear of death.

I propose to prove that that baboon on watch is morally superior to that fat poltroon who made that wisecrack. Patriotism is the most practical of all human characteristics. But in the present decadent atmosphere patriots are often too shy to talk about it – as if it were something shameful or an irrational weakness. But patriotism is NOT sentimental nonsense. Nor is it something dreamed up by demagogues.

Patriotism is as necessary a part of man’s evolutionary equipment as are his eyes, as useful to the race as eyes are to the individual. A man who is NOT patriotic is an evolutionary dead end. This is not sentiment but the hardest of logic.

15 Responses to Robert Heinlein on Patriotism