Trump vows to bring back waterboarding. Good for him because water boarding is not torture and those who think it is are either incapable of making moral distinctions or live in a world of moral equivalence (but I repeat myself). 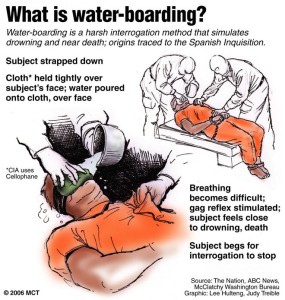 This is more than just an opinion as shown in a well-reasoned legal opinion by the President’s counsel in 2002. As Glen Reynolds, law professor and blogger has argued, “The ‘torture’ label is (as usual) just a liberal/progressive subjective conclusion, not an actual legal argument.”

More to the point, the categorization of waterboarding as torture is no different than judging a wolf-whistle as felony rape. I’ve written extensively on this subject and if you are shocked by such opinions, then you haven’t. I might recommend you begin your studies here.