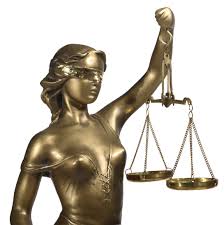 Justice is a moral value whose expression in the Western Tradition (a.k.a., the Judeo-Christian tradition) is to render judgments. Its most common expression is in legal contexts in which justice is served by resolving disputes (criminal or civil) before disinterested parties ((In Western Law this might be a court or magistrate)).

On this page you will find a brief summary of the Biblical basis for Western justice followed by a critique of Social Justice, a euphemism for a particularly egregious kind of injustice meant to obscure and uplift its effects.

What is Justice? In the Western Tradition, which is to say the Judeo-Christian Tradition, the concept of justice derives its meaning from the Lex Talionis of the Hebrew Bible, Exodus 21:23-25 (my translation):

…then you shall give life for life, eye for eye, tooth for tooth, hand for hand, foot for foot, burn for burn, wound for wound, stripe for stripe.

This was understood by the ancient Hebrews as a figurative expression of “just deserts”, i.e., the judgment must fit the offense.

However, the administration of justice was as important as its definition. Leading up to the Lex Talionis is this from Exodus 23:2-3:

You shall not follow a majority in wrongdoing; when you bear witness in a lawsuit, you shall not side with the majority so as to pervert justice; nor shall you be partial to the poor in a lawsuit.

So important was the principle that the determination of just deserts be untethered to status or position, that it is restated in Leviticus 19:15:

…you shall not be partial to the poor or defer to the great: with justice you shall judge your neighbor.

Moreover, the Bible establishes standards by which judgments are to be rendered (Deut 19:15):

A single witness shall not suffice to convict a person of any crime or wrongdoing in connection with any offense that may be committed. Only on the evidence of two or three witnesses shall a charge be sustained.

Finally, justice must be administered by a disinterested party ((For example, a court, the ruler, or city council, etc.,) having recognized authority (Deut 19:16-17):

If a false witness comes forward to accuse someone of wrongdoing, then both parties to the dispute shall appear before the LORD, before the priests and the judges who are in office at that time

The Bible lays out the principles underlying the Western conception of justice. They can be summarized as follows:

The Intellectual Incoherence of Social Justice

F. A. Hayek on Social Justice

A Moral Calculus for Torture